my son needed a little break from the winter doldrums back in grey-skies-will spring-never-arrive-cleveland, so we sent him a ticket to fly into las vegas and planned a few days of camping and a visit to death valley national park.

now the name death valley conjures up a desolate, barren wasteland of nothingness. a mad max-like expanse of desert as far as the eyes can see, with nothing growing, just the occasional blowing dune, or skeleton of the tourist before you who didn’t bring enough water. (always bring enough water)

so, we were pleasantly surprised when we found that death valley had really more life than death. and just as many highs as lows.

one of the most spectacular highs being dante’s view.

from the top you could see 360 degrees for miles. and on the way up there (you climb a mile high over 13 miles of winding road) was so much green, and wildflowers…..no death anywhere.

and the sunset from there, well, it sure takes the mind off dreary cleveland weather.

there were lots of opportunities to climb things. 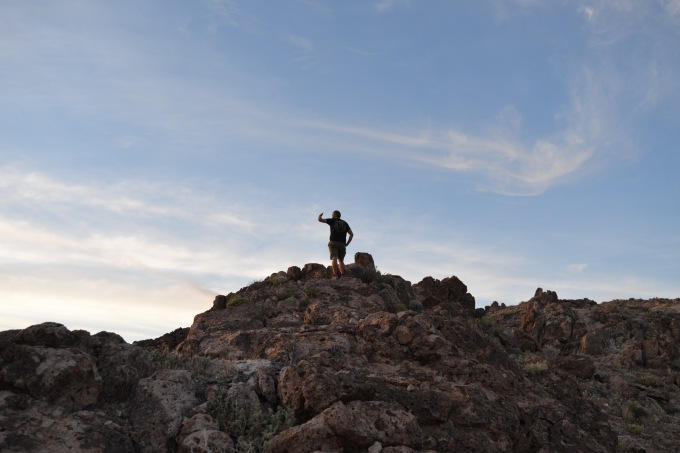 and climbed they both did.

this is called the artist’s palette: it’s mounds of colorful mineral-rocks left after volcanic activity. it basically looks like a melted ice-cream sundae.

the lowest point of the trip (get it, lowest) was badwater basin: literally the lowest place in the western hemisphere. we got there before 9am and it was already climbing above 90 degrees. it’s the craziest place I’ve ever been, will probably ever be. the smell in the air is like sulphur/salt; the “ground” crunches beneath you and the silence (once you get away from the other tourists) is deafening. you’re almost 300 feet below sea level, and surrounded by mountains that reach a mile into the sky that are topped with snow.

my favorite part was hiking through mosaic canyon. the boys left me to do their own climbing of the walls instead of just hiking the path, so I enjoyed the cool canyon walls and the silence all by myself.

even though it’s name is intimidating, and some of the days were hot and tough, I think we conquered death valley. it is now one of our top five national parks; it is park number 25 (if you’re keeping track) that we’ve visited since december (including national monuments, not including national forests) *btw: national monuments, like white sands, are not “national parks” merely because it takes an act of congress to make it so. death valley didn’t become a national park until 1994; it had been a monument since the 30’s. your history lesson for the day :)